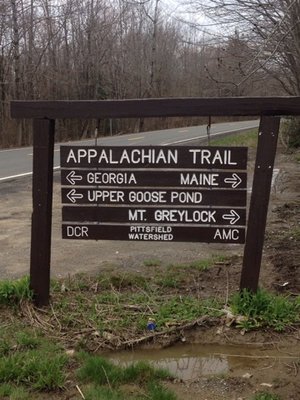 In late March of 2018, we vacationed with my in-laws in North Carolina. During this trip Zach was planning on hiking in Maryland, West Virginia, Virginia, and North Carolina. Unfortunately the winter prevailed leaving 3 feet of snow from a blizzard in the Appalachian Mountains in these states, during this time.  Due to personal commitments and weather, Zach did not get a chance to hike until the last weekend of April 2018. I also had an event to coordinate for my business, the Sunday of that weekend in Albany. Since we were already out that way, we agreed that this would be a good opportunity for Zach to hike Saturday (on our way out to Albany) and Monday (on our way back from Albany).

The starting point was on the south side of Dalton, MA. On the way we passed Herman Melville’s house, who wrote Moby Dick. I was surprised to learn that he lived that far west, especially since his story is based off of the sailor’s lives and expereinces in New Bedford, MA.

To get to the starting point, I had to drive through a lumber yard to drop Zach off, and he had to cross a set of train tracks to get onto the trail. He would be hiking approximately 7 miles to Gulf Road in Dalton, MA.

I am a creature of habit, and went back to Juice N’ Java to work and finalize details for my events that were going to take place on Sunday and Wednesday of that week. I had 3 hours until pick up time, and I was determined to make use of every second of it.

Driving to this pick up location was easy, and through a town that reminded me of my hometown in Pennsylvania.  One of the cool things about doing this, is that we get to see parts of New England that we would never have known existed. I was there to meet Zach within 10 minutes of him coming off the trail. He changed, and we got in the car to head to Albany.

On Monday, we came back to the same pick-up location so Zach could continue his hike from here. He went 13 miles south and ended in Lee, MA. During this hike he crossed Warner Hill, which provided some good views. I ended up breaking out of my comfort zone and finding a new place called Haven Cafe to hang out in. For a Monday, the place was packed, and my biggest issue was trying to find an outlet to plug in my labtop. I wish I had problems like this all the time. 🙂 The food and beverage were excellent, and before I knew it, I was being summoned to pick Zach up.  I did not anticipate the pick-up point being over 2o miles away from where I was. This pick up point was probably the most difficult I’ve had to deal with so far. I bet you 5 years from now, I’ll be begging for a pick up point like this. But the road was up a mountain, extremely curvy and littered with pot holes. I took it easy with the car, but it was almost 40 minutes by the time I got to Zach.  It took us another 15 minutes to drive out of the state park that was miles of gravel and dirt roads. We got on the highway, and headed home. On this hike, Zach came around a corner and startled a Red Tailed Hawk.  He also came upon a senior citizen who was off the trail pruning weeds from the trees and plants in the area.  The man was wearing a nice pair of brown leather dress shoes, khaki slacks, and a tucked in polo shirt. At this point the closest access point to the trail was 3 miles in either direction. Bizarre, yes, but I’m sure that this isn’t the first odd thing that Zach will come upon.

Here are the pictures from Zach’s hike that weekend.