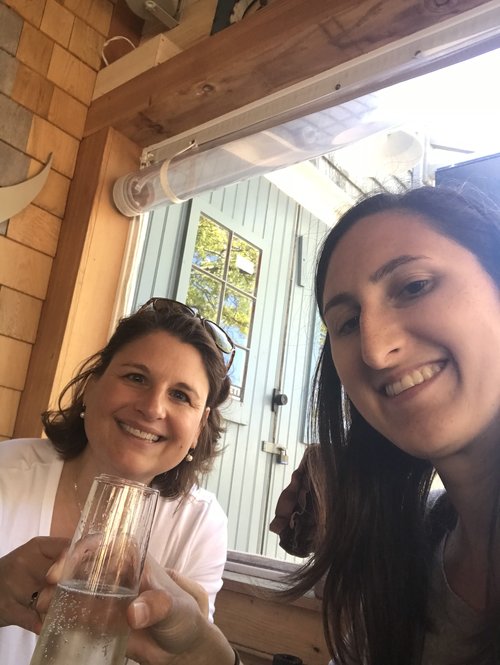 Zach and I again, found ourselves in the car on the Turnpike, heading towards the South Western part of Massachusetts.

“It is not down on any map; true places never are.”

Our destination was south of Stockbridge, Massachusetts near Great Barrington. Looking back, this was my favorite day of all our hiking trips this year. Two weeks prior to this, I had started reading Moby Dick by Herman Melville. I was inspired to read the book after passing Herman Melville’s house, Arrowhead in May. On this day, my plan was to drop Zach off, he was going to hike north to Tyringham. I was going to travel to Arrowhead and tour Herman’s house.

At the time, I did not realize the significance of Stockbridge. This town has been like an onion with discoveries for me this past summer. We drove through the town. The library was having a book sale and the shops, cafes and restaurants were buzzing with patrons. As we passed all this, I finally got to the end of main street, where we had to turn left to continue traveling south on Route 7. As we were waiting for the cars in front of us to turn, I looked left, and saw The Red Lion Inn.

After glancing at this place, I felt it calling me to go in. I HADto go into this hotel. Even writing this, I’m not sure why I was so infatuated with this place at first glance. But I finally made my left turn, and declared to Zach, that I NEEDED to go into that place, and soon.

A few more miles down the road, I dropped Zach off. Here he is getting ready before the hike.

This part of the trail was at the bottom of a gigantic hill. Zach was going to start his hike going up. Here are more pictures:

Zach finished getting ready, gave me a kiss, and then was off hiking up the gigantic hill. I got in the car, and drove back the way we came. When I got back to Stockbridge, I passed the Red Lion Inn again, and was torn between continuing north to Arrowhead or parking the car and exploring. Realizing that I had 5 hours to do whatever I wanted, I parked the car at the end of Main Street.

I thought the reason why the town was buzzing with people was because of the book sale at the library. How naive I was. I didn’t realize that this town was actually world renown mostly because of a little someone called Norman Rockwell. This is one of his famous paintings of Main Street, Stockbridge during Christmas:

The building on the far right at the end of Main Street is the Red Lion Inn. I really had no idea.

After walking and enjoying the shops, I came to the end of the street. I looked up at the commanding building of the Red Lion Inn. This place is really something. Its gigantic front porch with the rocking chairs and antique furniture reminded me of the turn of the 19th century.

After stepping through the large entrance door and closing it behind me, I really felt like I had been transported back to the 1890s. Take a look at these pictures from my hotel exploration:

After spending what seemed like hours at this place, I left exhausted. There was SO MUCH to see with all the antiques that lined the hallways. I could also see the hustle and bustle of times gone by. The maids in their uniforms cleaning the rooms; the parties going on downstairs in the dining room; the gentleman in his top hat sitting on the porch reading a newspaper with a cup of coffee beside him. I am not into ghosts or paranormal activity. To be honest, that stuff scares the sh*t out of me. But I can say that I did “feel” something when I walked in there. It was a very “busy” place.

I walked back to the car, and realized that I had only been in Stockbridge for an hour and a half. I still had plenty of time to go to Arrowhead. It would only take me 15 minutes to get there. I arrived, purchased my ticket, and went on the tour. Was definitely worth the trip if you are interested in the lives of famous authors.

From right to left, top to bottom:

I learned that while Herman Melville lived here, he wrote several works including Moby Dick. Unfortunately he did not experience much success from his writing career. After going into debt and living off his wife’s family, he moved to New York City to finish out his life as a customs inspector. Most of what was written about in Moby Dick came from Melville’s actual experience as a sailor. Some juicy gossip I also picked up: he was was obsessed with Nathaniel Hawthorne and might of had an affair with his neighbor Sarah Morewood.

After my trip to Arrowhead and finishing the book Moby Dick, I was inspired to follow in the footsteps of Melville. I went to visit New Bedford at the end of July. The Whaling Museum was excellent. I also got to visit many of the places Melville references to in the book including Nantucket this past September.

For those of you who have read Moby Dick, you understand the significance of some of these pictures.

From right to left, top to bottom:

After a full day, I was ready to pick Zach up and go home. I only had to wait another hour before he would be coming off the trail. He had beautiful weather and thought the coolest thing on this segment of the trail was the trail stand. See below for his trail pictures.