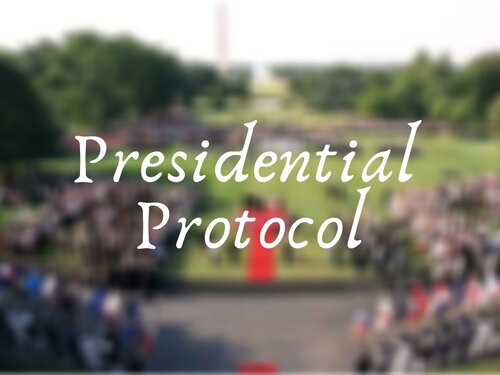 Ever wonder what the point of this day is?

Today is the day we honor all of our presidents of the United States, especially the first one, George Washington. Today was his birthday.

In honoring our presidents, let’s review the protocol for a state visit. This type of event focuses on hosting a head of state of a foreign country.

The State Visit:  The event protocol of a State Visit starts with a full-honors arrival ceremony on the South Lawn of the White House. This ceremony includes the National Anthem. This song is played and no applause is allowed afterward. Following the National Anthem is a 21-gun salute. After the salute, there is an “Inspection of the Troops”. The President and Guest of Honor walk the South Lawn while inspecting the troops. A speech by the President of the United States is given. The Guest of Honor follows with a speech of their own. At this time the Guest of Honor and the President of the United States present gifts to one another.

The Gifts: The old adage, “What do you get for the person who has everything,” comes to mind. In this case, what do you get the person who is the leader of the free world? Dignitaries have sent and brought gifts such as a zebra, paintings, coats, ceremonial weapons, a tea infuser, a lion, coasters, candles, a panda, and even crocodile insurance.  The key is to bring and give something that is symbolic. In 1966, Congress enacted the Foreign Gifts and Declarations Act, which mandated that all gifts to the President of the United States stay at or under $390 in value. Regardless of whether a President loves the gift or is secretly wishing to re-gift it at the next State Visit, all of them are sent to the National Archives.

The State Dinner: After the ceremony on the South Lawn, a State Dinner usually follows. The state dinner begins in the Yellow Oval Room of the White House with cocktails for the president, first lady, and selected guests. At this time other guests who have been invited to the State Dinner start arriving. These individuals are directed towards the Blue Room of the White House. At a designated time of the event, the President of the United States, First Lady and their special guests make their way down the grand staircase to the Blue Room. While they are walking, the song “Hail to the Chief” is played. The national anthem of the foreign dignitaries is also played at this time.

Once the President of the United States, First Lady, and their Guests of Honor are in the Blue Room, each guest is announced and introduced by a military aide. When guests are finished with the greeting, they are seated for dinner. After all the dinner guests have taken their seats there is a four to five course meal served, as well as a form of entertainment to end the night.

Invitations, Dress, Decor and Food: How do you get invited to something like this? You must be one of the following: an ambassador, diplomat, member of Congress, member of the President’s Cabinet, or celebrity. If someone is not able to attend a State Dinner, there are only four reasons accepted when sending regrets: family wedding, unavoidable absence too far from Washington D.C., death in the family, or illness.

The attire for the night is formal. This implies floor-length gowns for women and tuxedos for men. Planners of the State Dinner need to be extremely detail oriented, especially when it comes to the decor. All the dinner’s decor is required to be symbolic of the United States and the country of the Guest(s) of Honor. The menu is chosen by the First Lady.