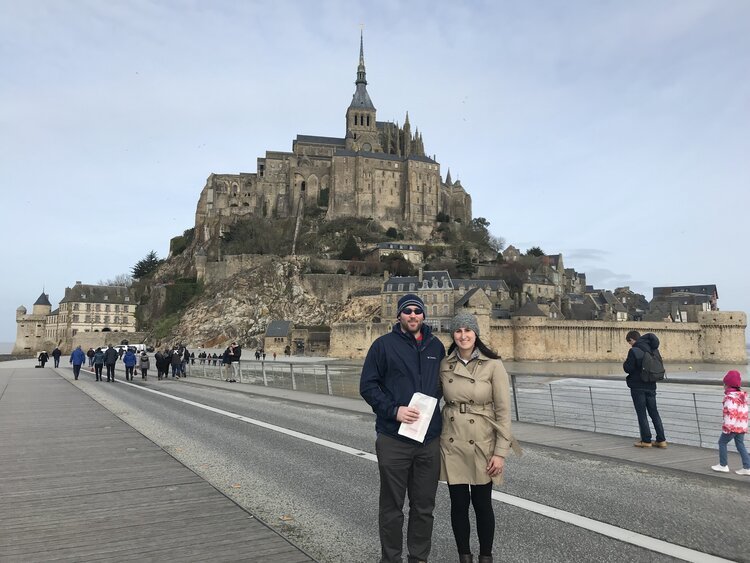 Last week marks 1 year of Zach and I traveling to France. The idea of traveling to France started in February 2018. We hadn’t had a vacation in over a year, and we hadn’t been to Europe since our honeymoon. I know, I know….cry me a river. But at the time, I really missed Europe. Nothing in the U.S. could ever compare to anything in Europe. Especially FRANCE!

After receiving this in the mail, my mind was made up. Especially since the girl on the cover of the magazine looked like me from behind. I also noticed that we have the same jacket. In the words of Audrey Hepburn from Sabrina, “Paris is always a good idea.”

We finally made our reservations in December of 2018. The planning for the trip took place up to the week before. Even though I waited my entire life to go to Paris, the planning for the trip was fit into three weeks, among a very busy schedule. We were also excited that our 8 day vacation would take us into other parts of northern France. Before we left, I did not feel like I planned this trip to its fullest potential. After returning, I realized I was wrong. This trip was truly one of a lifetime, my favorite of all time, and I will compare all other trips and experiences to this one.

Before we left Boston, as per our tradition, we created a video diary entry.

Zach and I flew into Charles de Gaulle Airport early Thursday morning. We rented a car and drove to Reims and then to Épernay. In Reims we visited the Cathedrale Nortre-Dame. It was colder in that church than outside, and I could see my breath. A very impressive piece of architecture with WWII damage still visible on the columns. After our walk through, we drove south to Épernay. As we approached Épernay, we drove among the vineyards. It was such a beautiful scene, I wish I would have taken a picture. I’ll just have to go back again and capture it. 🙂

This day was a marathon and felt more like the Gumball 3000 than being on vacation. We drove roughly 600 kilometers or 370 miles through two counties and some very significant locations. We started in Verdun to see the Ossuaire de Douaumont and Fort Douaumont. We did not realize when walking through the Ossuaire de Douaumont that it is the location of over 130,000 unidentified remains from French and German soldiers. That would explain the creepy feeling inside. The Fort was unlike anything we had seen before. Part of it is flooded, but we still saw the vast majority of the main quarters. Another really creepy unsettling place, but would highly recommend seeing due to the historical significance.

After Verdun, we headed to Rouvroy, Belgium “for booze and chocolate.” Zach and I also got to add another country to the list of places we’ve traveled to. On the way, and for miles, we could still see the trenches that were built into the land from World War I.

We passed through Sedan, to see the Château de Sedan, then headed north to Amiens. We were running low on time, and wanted to make sure we arrived in Amiens before the church closed at 6:00PM., so we didn’t spend a lot of time in Sedan. I had read that St. John the Baptist’s head was displayed here as a relic, and was really interested in seeing it. So we HAD to get there. We arrived in Amiens at dusk, fifteen minutes before the church was officially closed. We went inside. It was very dark and ominous. The only light came from the votive candles and display lights. We came to the case where John the Baptist’s head had been on display, and found it empty. I still don’t know why it was removed, and was disappointed that we didn’t get to see it. But our trip was not for naught. We found Amiens to be a very modern city (it was obliterated during World War II, and had been rebuilt). I also liked seeing where Jules Verne, author of Twenty Thousand Leagues Under the Sea (and many other notable works) spent the last 15 to 20 years of his life. Would love to go back here and explore more. Our day ended in Rouen, which at one point in time was a Viking colony.

Zach and I woke up exhausted in Rouen. This would have been a wonderful city to explore, but keeping our priorities in mind, and time being of the essence, we were quickly back on the road again. We drove the approximately three hour trip, with one stop for coffee. The journey was mostly by highway, and there wasn’t any traffic. As we drove closer to Mont St. Michel, we could see the Abbey majestically rising from the coastline. The picture below is about 10 to 15 miles away. As in most cases, the pictures to this place do not do it justice.

Upon arrival, we parked our car and got onto the tram that takes you to the Abbey. Years ago, tourists would have to plan their trip around the tides because the footbridge hadn’t been constructed. There are still times during the year, when there are Lunar tides, and the bridge is overtaken by water. Visits to the island momentarily stop until the water recedes. In England, visits to Mount Saint Michael are still governed by the tides.