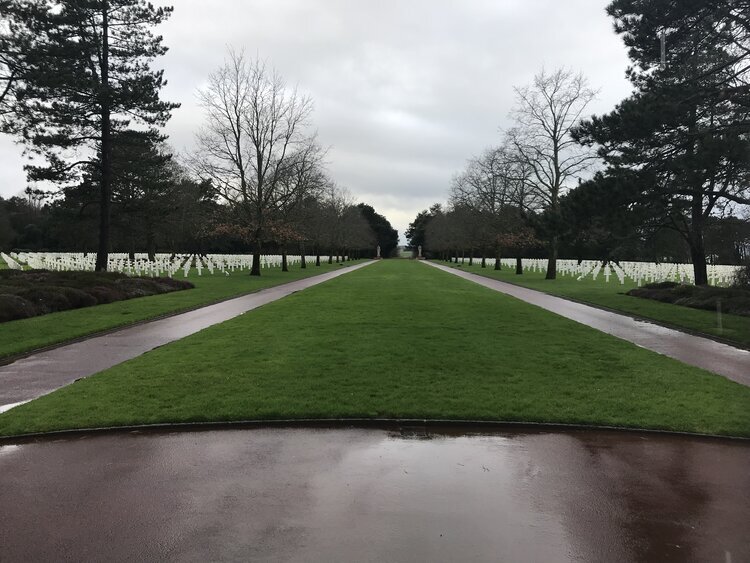 It is hard for me to explain the feeling and magnitude of visiting Normandy. I will do my best.

As an American, it was truly a humbling experience. As WWII buffs, we were awestruck while visiting the beaches and driving through the farm fields. What the men went through to successfully execute D-Day was unbelievable. While walking the beaches, I was a ball of emotions. I wanted to cry for all the young men who were shot before they even got out of the transport; for the ones who drowned because their equipment was too heavy and didn’t get the chance to land on the beach due to heavy enemy fire; for the army rangers who scaled the cliffs and made a successful attack at capturing Pointe du Hoc; for the men who landed in gliders further in-land and never got the chance to fight because they were killed on impact; for the enemy who fought hard, but in the end never got to go home to loved ones. War is such a horrible thing for all who are involved. I know this from the stories I’ve read and the history I’ve studied. I’m very thankful I do not have any real experience with this, and hope I never do. Being in Normandy brought everything together for me and made Zach and I sincerely appreciate the sacrifices that were made on those beaches in 1944.

Visiting Mont-St.-Michel was surprisingly quick and after getting in the car, we hightailed it up to Normandy.

We arrived in Sainte-Mère-Église and drove around the town. If you have heard of this town, it’s probably because of John Steele. John Steele was an American Paratrooper whose parachute got stuck on the church steeple. He managed to survive the fight while being suspended, and was finally cut down by two German soldiers. He was taken as a prisoner of war but escaped a few days later and returned to the Allied side. He survived the war and the movie, The Longest Day was based on his wartime experience.

While driving between the towns and beaches, there were markers and statues of significance. A few that we stopped and appreciated are below. If you have seen the HBO series Band of Brothers, this will be special for you.

It was a 15 minute drive from Sainte-Mère-Église to Utah Beach. This is the first of two beaches where the Americans landed.

This was a very interesting area, and probably one of the best preserved among the beaches. You could still see the crater and bunker damage from the Allied ships. It was as if no one had touched this area since 1944.

This is the 2nd beach where the Americans landed. If you look closely, you can see the German pillboxes that were built into the cliffs.

It was getting late, dark and had started to rain. Zach and I decided to head over to one last beach for the day. Gold Beach was the first of two that the British landed on. The Mulberry Harbors are still there. After visiting this beach, we drove to our hotel in Caen.

Caen was a large modern town that had been destroyed during WWII. We checked into our hotel, which we discovered was in the middle of a college campus. It seemed that this part of town was on some type of holiday break. There wasn’t a lot of traffic and cars in the parking lot at the hotel were scarce. I think we were one of two couples staying at the hotel that night. The young woman who checked us in could not speak English, so I got to practice my French. I was surprised at how patient she was as I stumbled through the rehearsed “ Nous avons une réservation,” and “Mon nom est Tarah Warner.”

After checking in, we were both hungry and drove around the hotel to see what there was to eat. There weren’t many options open and we didn’t want to make McDonald’s (which we had frequented due to time constraints, 4 times up until this point on our vacation) a habit. We finally settled upon an Asian Buffet restaurant called “Steak Family” that was close to our hotel. It looked very busy. When we walked inside, it was very large and reminded me of a roller rink. We were taken to our table and Zach waited there while I ventured to see what a French influenced Asian buffet had to offer.

There were traditional items like noodles, dumplings, dim sum, and hibachi meats. I almost felt at home until I saw the escargot next to the raw clams and oysters. There was sushi, but I decided against it to avoid potential food poisoning. Thanks to my sanitation training, all raw food is off limits unless I know it has been handled properly. As with every Asian buffet there was red cubed jello, bananas in red sauce and a soft ice cream machine. They also had delicious banana and strawberry candies that had the consistency of the soft orange peanut candies. I settled on the traditional cooked Asian cuisine items and returned to the table. Zach got his food and also decided to keep it traditional. We were both pleasantly surprised. The food was delicious and I went up for seconds on the banana and strawberry candies.

We woke up the next morning and went downstairs to breakfast. This was the first and only hotel we would stay at that had scrambled eggs, bacon, and sausage (traditional American cuisine) available. We were also surprised at how much food there was and the abundance of options. Being aware of the low occupancy the night before, we were unsure if this was a normal breakfast spread. We had also heard stories of the local people in this area being very hospitable towards Americans. We will never know for sure whether this was targeted hospitality for us Americans or just a common practice. But we both got the sense that we were being treated graciously here.

We packed our car and headed to the Normandy American Cemetery. When we got to the cemetery it was pouring rain. As we were walking among the rows of crosses, the weather started to clear. Towards the end of our visit, the sun came out and I was able to capture some really amazing pictures with the sun rays. I also think I might of caught an orb in one.

After visiting the cemetery, we drove to visit the remaining two D-Day beaches: Juno and Sword. Juno is where the Canadians landed. Sword was the second of the two beaches where the British landed. Both had similar beach views with no cliffs. At Juno beach we saw a German Bunker sunken into the sand dunes.

After we had visited the beaches, we drove to “Le Grand Bunker.” This was a large, 5 floor, German bunker which remained fully intact and occupied until the last moments of the D-Day invasion. It took 5 kilos (approximately 11 pounds) of explosives for the British to gain access to the inside. Bob Orrell, who was a lieutenant with three of his men, gained access and were greeted by a voice from up the stairs saying in perfect English, “It’s alright, Tommy, you can come up.” Orrell answered, “Bugger off, you come down!” With no other option, 51 German soldiers and 2 Officers, who had been taking shelter in the bunker for days, finally surrendered.

Since most of the bunker had been preserved and intact, Zach and I got the rare chance to see how German soldiers lived during the war.

Our last stop in Normandy was Pegusus Bridge. The taking of this bridge by Allied Troops occurred at the start of the D-Day invasion. The goal of taking this bridge was to mitigate the possibility of a German counter attack. To see the actual bridge in person was very cool. We also found out that the original one had been located 50-100 feet from where the current bridge stands.

After seeing the bridge, we had finally come to the conclusion of our trip to Normandy. As we drove the two and a half hours back to Charles De Gaulle airport to turn in the rental car Zach and I were still awestruck. We both had studied and read so many books on events that had taken place where we had just been. We were especially taken by the fact that life has moved on there. Yes, there are countless memorials, statues, head stones, and markers where significant people fought and died. But farmers are still tilling the soil every year. Most of the beaches have become “beach towns” where visitors flock to in the summer months. I thankfully never had to live through a war like that one, and suspect that “moving on” was the only way to cope with the atrocities witnessed and complete destruction of the local area. The quote from Luke the Evangelist comes to mind, “Remember the past, plan for the future, but live for today, because yesterday is gone and tomorrow may never come.”